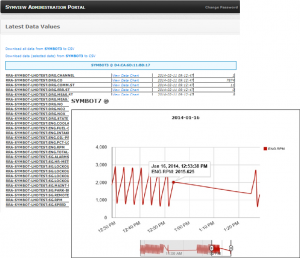 Symboticware received a $100,000 grant from the Northern Ontario Heritage Fund Corporation to develop an improved version of its SymView software, which allows mining companies to access important data, such as machinery performance and ground stability, in real-time.

The grant will cover about 40 per cent of the cost to develop and implement the software solution, said Symboticware’s president and CEO Kirk Petroski.

“The money will allow us to basically have the resources internally staffed to build this new software,” Petroski told Northern Life.

The remaining $150,000 for the project was provided by industry partners and Symboticware’s own investments in research and development.

“To me it’s a very good market opportunity,” Petroski said about the project. “It provides reliable data, it provides real-time data and it’s manageable.”

Any mine manager or supervisor can access data on their smart phone, tablet or computer through an online SymView portal. The data the software collects, for existing Symboticware technologies, can also be added to the companies’ larger data management systems.

The SymView software can also interpret data from other Symboticware products, including its SymBots and and Speed Guard technologies.

The SymBot is a device that connects to underground machinery, such as scooptrams, and measures everything from engine parameters – such as oil pressure – to air quality.

The Speed Guard device, also attached to scooptrams, controls their speed by limiting an operator to a speed limit set by the mining company.

Petroski said the ability to feed real-time data over wireless networks in a mining environment is relatively new.

The SymView software package, paired with hardware like the SymBot and Speed Guard, will allow mining companies to do predictive maintenance on their equipment.

Mining companies have typically maintained their vehicles and equipment on specific schedules. After a particular number of hours out on the field a piece of equipment must be inspected.

But scheduled maintenance does not take real-world conditions into account, said Petroski. By monitoring equipment performance in real-time, mining companies can better plan their maintenance and save money, by preventing equipment breakdowns and more expensive repairs.

Symboticware can also provide mining companies with geographic data. With a piece of hardware called a multi-point borehole extensometer, the company measure ground movement and monitor stability at open-pit mines, for example.

The SymView software does not reinvent the wheel, Petroski said, and feeds the real-time data into existing data management systems, such as PI, that have already established themselves as industry standards.

The Symview software is expected to be fully deployed by June 2014 through a platform as a service model. Companies will pay a licence fee to use the Symboticware hardware – such as the SymBot and Speed Guard – paired with the SymView software package.