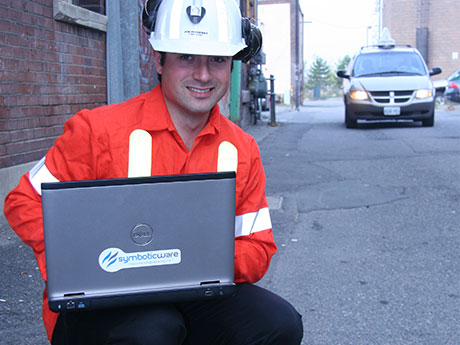 The miner currently collects data manually from 47 wells equipped with multi-point borehole extensometers to monitor ground movement. The wells are located throughout the heart of the city’s core in parking lots, golf courses, next to fast food restaurants and other built-up areas. The wells are 18 to 16-inches in diameter, vary in depth from 10 to 60 feet and are covered by steel plates.

The multi-point borehole extensometers are long cables that stretch and contract in response to ground movement. If subsidence is detected, the mining company sends out a crew to dump sand into the well. The company used to send out crews every six months to take manual readings from the instrumentation.

“They’d have to send out two or three guys because they had to lift a manhole cover to get a reading,” said Symboticware president Kirk Petroski.

Snow cover in winter was a problem, and sometimes they’d have to stop traffic.

With the company poised to proceed with the development of a nearby open pit, there’s a concern that the dewatering and blasting will trigger ground movement and subsidence, so a decision was made to go with an automated data collection system to streamline monitoring, said Petroksi.

The pit will reclaim land containing mine hazards and unstable underground workings from historical mining operations, creating a lake and parkland accessible to the public.

“What we’re doing is connecting a wireless device to the head of the sensor underneath the manhole cover,” explained Petroski. “The wireless device transmits the readings through a mesh network to a main controller at the minesite.”

“The furthest monitoring point is four kilometres away, but they’re all located within 200 to 300 feet of each other. All these systems wake up and use each other to send the data to the main controller.”

Four wells were equipped with wireless devices in November. The remaining 43 wells will be converted for wireless data collection between January and May. Solar collectors or lithium-ion batteries will supply power, depending on the location of the wells. Symboticare has been contracted to supply and maintain the system for a 10-year period.

A Google Earth-type geographic information system is being used to geospatially represent the data from the 47 wells, with colour-coded markers alerting mining company staff to ground movement and pop-up displays revealing extensometer readings.
TECTERRA, an Alberta-based organization, provided a one-year loan as part of its mandate to support the development and commercialization of geomatics technology.

Symboticware specializes in wireless data solutions for a variety of applications and is best known for its Symbot, a device designed to collect and wirelessly transmit real-time equipment performance data in underground mines.